As the gay marriage debate rages here in Minnesota- we have a proposed amendment to our constitution on the ballot this November that would define marriage as only between one man and one woman- and across the nation as a whole, I feel the need, as a Christian, to weigh in.  I say "as a Christian" because as an under 30 year old, college educated, Democrat I'm statistically very likely to be in favor of gay rights.  But as a Christian?  That's where I break from the norm.  Sadly, most people who proclaim themselves Christian are the first to condemn gay marriage.  To me, this is not only a horrible distortion of Jesus' message of love and acceptance but a distortion of the Bible itself as a literary source.

Let us begin with the main reason for a Christian's opposition to gay marriage, the "traditional" marriage argument.  Sorry to break it to you, but there is no such thing- at least that we would actually want to enforce- as traditional, Biblical marriage.  Women in Biblical times where seen as property and only valuable insofar as they were virgins who were able to produce children. Widow? You're screwed. Prisoner of war? You're screwed. Raped? You're really screwed.  The picture below highlights the absurdities of sexual relationships the Bible considers acceptable- take some time to fully read it! (click on it to enlarge for easier reading) 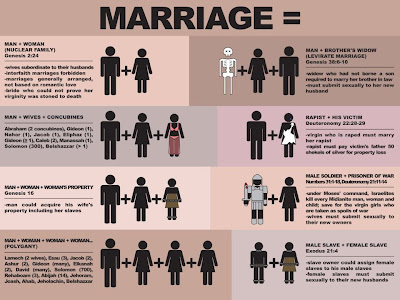 Okay so there is no such thing as "traditional marriage" in the Biblical sense. Is there a 1950s era mom, dad, 3 kids, white picket fence driving a Chevy sense of traditional marriage? Sure.  But that is far too relative, recent, and individualized to say that it must be the norm for all.  Interracial marriage was seen as an unacceptable as recently as 50 years ago, and I hope we can all look back and see the absurdity of that. 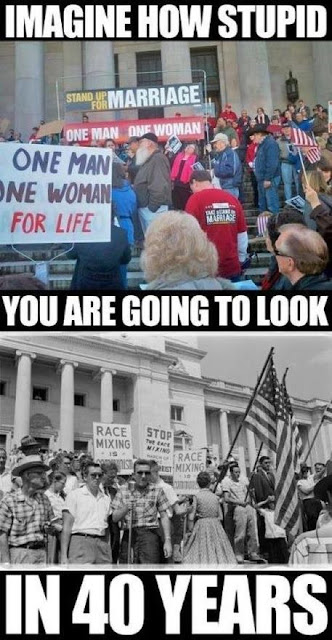 Now to the Bible as a piece of literature, since that's what it is.  Is it divinely inspired? Yes. But God has no typewriter in Heaven, he did not physically write the Bible, man did, and what's more important is that man translated the Bible over and over again, from language to language.  And things are always bound to get lost (or added...) in translation.

The Greek term para physin has been translated unnatural; it should read atypical or unusual. In the technical sense, yes, the Stoic philosophers did use para physin to mean unnatural, but this term also had a widespread popular meaning. It is this latter meaning that informs Paul's writing. It carries no ethical condemnation.

Compare the passage on male-male sex to Romans 11:24. There, Paul applies the term para physin to God. God grafted the Gentiles into the Jewish people, a wild branch into a cultivated vine. Not your standard practice! An unusual thing to do — atypical, nothing more. The anti-gay "unnatural" hullabaloo rests on a MISTRANSLATION." 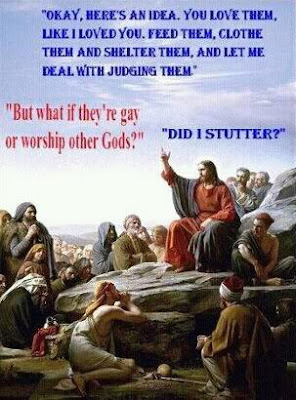 The Biblically versed among you may be shouting at the computer monitor, "But wait! Leviticus tells us that for a man to lay with another man is an 'abomination!'"  To that I would say, Leviticus is the Old Testament.  Old Testament Jews were obsessed with rituals and cleanliness.  Were gay people impure in their eyes? Sure. But so too was anyone with a tattoo, a woman who wore pants, anyone who ate pork, a man who touched a woman while she was menstruating... the list goes on and on and I think we can all agree they were extreme and have no place in 2012.  "Jesus taught lucidly that Jewish requirements for purity — varied cultural traditions — do not matter before God. What matters is purity of heart."    The way modern day Christians go on and on about it you'd think all Jesus spent his time preaching about was homosexuality, right? Wrong.  There is not one single example of Jesus speaking about homosexuality in the Bible, not one.

So my fellow Christians, I beg you, to do as Jesus commanded and look inside your heart and be honest about the true reason you may oppose gay marriage.  Is it because it grosses you out? Scares you? Makes you think more people will become gay?  None of those reasons are founded in Christian love.  And if we do not have the love of Jesus Christ in our hearts, what are we?  We are not truly Christians at all.  How sad to think you would turn away from the greatest commandment of all- to love one another- because you were so concerned with what consenting adults do in the privacy of their own homes that you voted hatred into law...

May the God of endurance and encouragement grant you to live in such harmony with one another... that together you may with one voice glorify God... Therefore welcome one another as Christ has welcomed you. ~ Romans 15:5-7
Posted by RLSP at 2:20 PM